Anyone that reads this blog will know that I am a firm believer in actual physical models. However, I also realize the benefit of virtual models. I use SketchUp quite a lot. While BIM is the final presentation model, SketchUp is the down and dirty study model. I equate SketchUp to the electronic version of chipboard. In a previous post I covered the basics of SketchUp, you can read that here SketchUp 101. 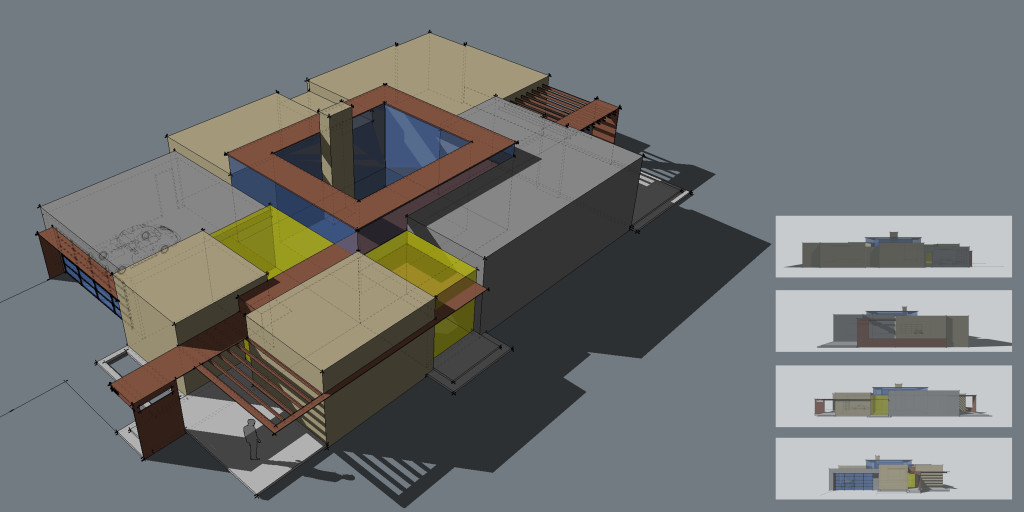 I’ve had numerous requests to provide more info on using SketchUp. As such, I thought it would be a good idea to go over a few of the basics in a bit more detail. I know some may be saying, “What the heck, this is basic info who needs a post on this?” There are plenty of resources/manuals available for SketchUp, however, I believe my perspective affords insight into real world implementation as an architect (whoa, settle down, those were big words). Keep in mind, there are people learning the software for the first time every day, so if I can make it a bit easier for them than I’ve done my part helping the world visualize in the third dimension!

With any luck I’ll continually add to my SketchUp resource and hope that others can benefit from it. Note that this post is based upon SketchUp version 8.0.16846 and may differ slightly from the most current Trimble version; it is also not meant as all encompassing, but rather a broad overview of some general tips and information.

With that I bring you SketchUp 102, Groups and Components! When modeling in SketchUp, make use of Groups and Components, they will become your friend. Go back and read that sentence again. SketchUp is inefficient if Groups/Components are not used, especially when trying to select entities. So what is a Group vs. a Component:

Group: a combination of several objects together into one ‘piece.’ For example you can create a window that is comprised of a frame and a piece of glass. You can than make a group out of the two ‘pieces’ which than makes it easier to edit and move it within the model. Groups can be copied and edited.

Component: a type of group that when copied and repeated, if one component is edited all of the other components will change as well. This is useful for windows that are used repeatedly and is very helpful when creating units for multi-family buildings. For instance, you could create a Double Hung window unit and place it 40 times in your model, if you than edit one component to be a casement window, the other 39 update as well- however, there is the option to make any one, or several of the components ‘unique’ such that their editing does not alter the other copies- perhaps a future post on that topic. Components can also be mirrored using the Flip command. The mirrored components retain their definitions, and are updated whenever an un-mirrored version is updated.

1. To create a Group or Component, select all the objects that you want included, right-click the mouse and select Make Component or Make Group, it’s also found under the Edit drop-down menu at the top of the screen. You’ll also have the option of naming the Group/Component.

2. Groups and Components can be edited by double clicking them. If you have Groups/Components nested within each other, you’ll have to double click the appropriate amount of times to get to the Group/Component you wish to edit.

Window 1: I’ve created a window frame and sheet of glass, each of which is composed of separate faces and planes. Notice when you try and select it only one line or plane is highlighted (keep in mind you could hold the shift key to make more than one selection, however that’s not the point of this example).

Window 2: The window frame and sheet of glass have each been made into separate Components. Notice when you try and select it the entire frame/glass is highlighted.

Window 3: The window frame and sheet of glass have been composed into a single unit and a Component created out of the two pieces. Notice when you try and select it the entire assembly is highlighted. Materials have also been applied to each of the window assembly Components. 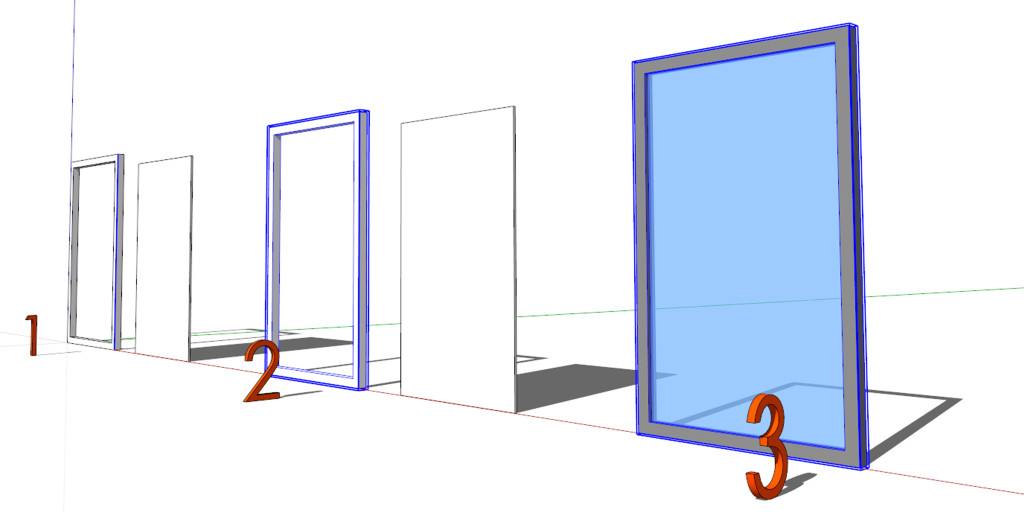 Group Example: Edit a Group and all copies of that Group remain as they were. 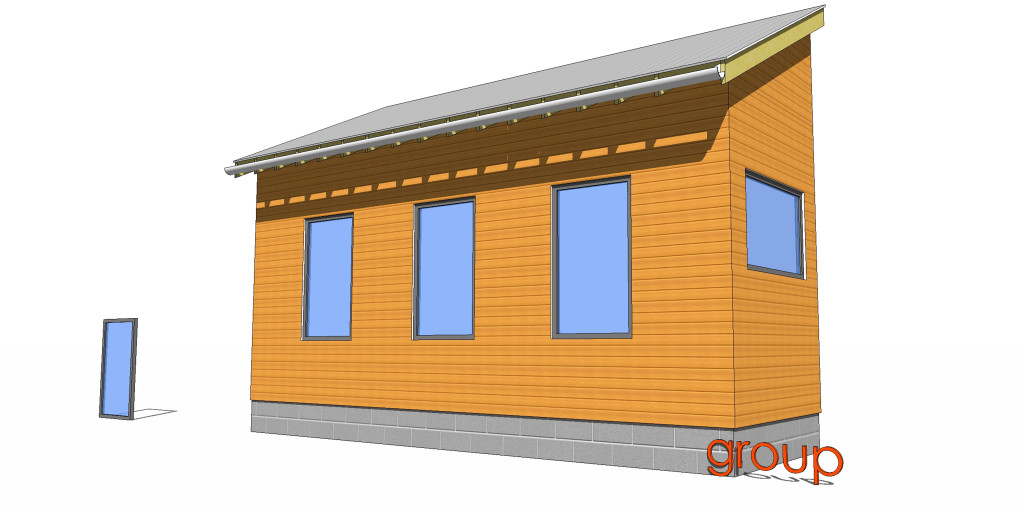 I’d like to see what it would look like if the windows had a ‘window box’ surround. If I edit the window Group on the ground- for simplicity I’ll just extrude the frame- you’ll notice that only that window Group is updated, none of the Group copies update: 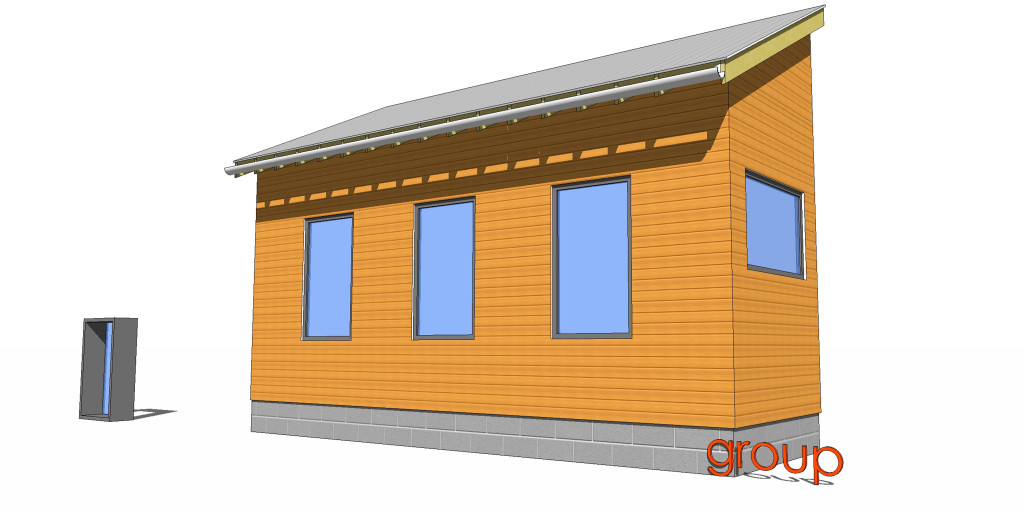 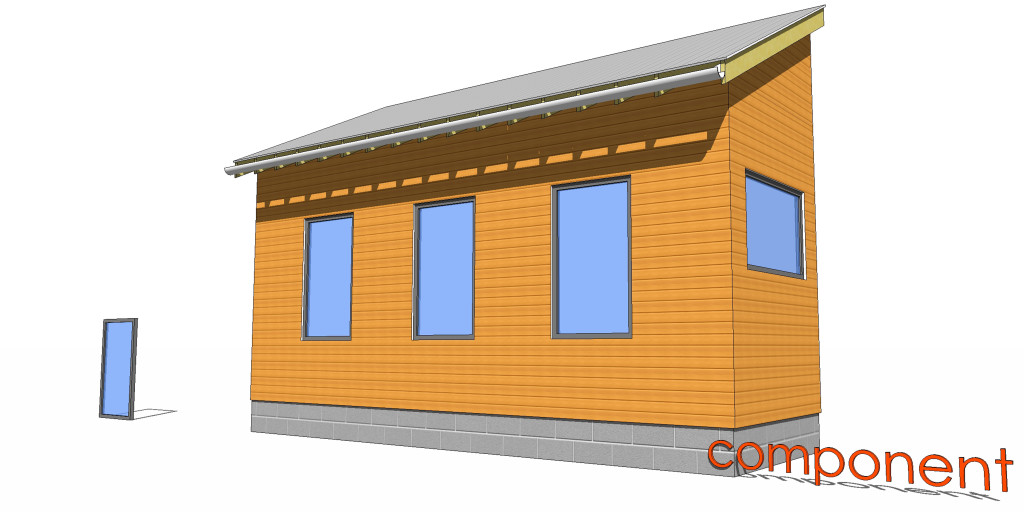 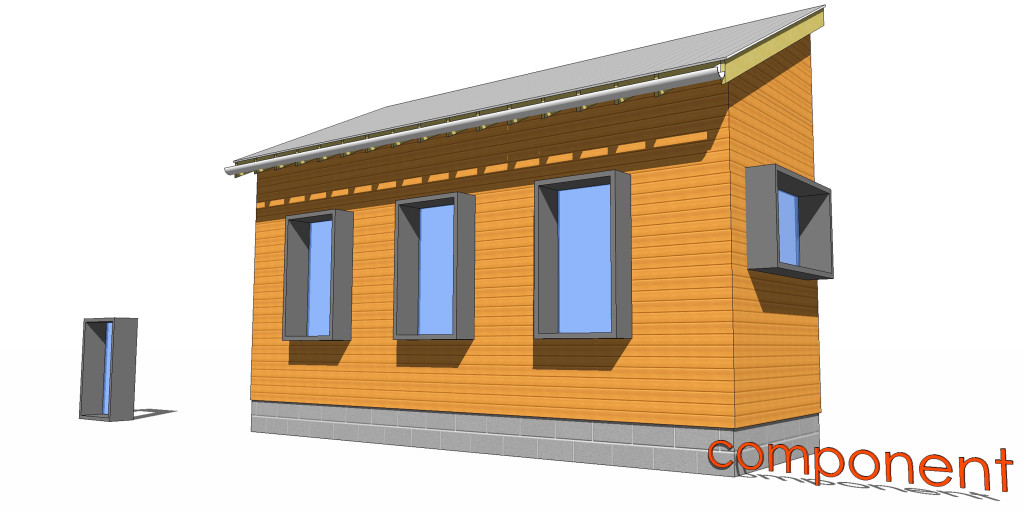 While this window is a simple example of Groups/Components, it’s evident that this is a powerful feature for modeling in SketchUp. For example, I’ve worked on numerous Multi-Family projects and my method is to create the individual units off to one side and then assemble the building from the units, which are Components. This makes it much easier to work on, units are able to be flipped and mirrored as need be and I only need to create one of each unit type:

If you’re looking for a reason to start using or try something new with SketchUp, look no further than the 5th Annual Life of an Architect Playhouse Design Competition This year SketchUp will be funding the construction of one of the playhouses. In addition to their financial support, they have contributed an awesome prize pack! This is a fun thing to do and the end result could be that your playhouse gets constructed and raffled off to benefit needy children. I’ve entered in the past and will be entering again this year.